When Oru Ogbo was asked by his employer last year if he would like to join a new program to train and support young leaders across Europe, he didn’t hesitate. As a Nigerian who came to the UK a decade ago and was working with PwC, he was keen to share his experiences and hear different perspectives.

“I wanted to hear other people’s views on the big topics: climate change, geopolitics, misinformation,” he says. “And to be part of shaping the leadership model for the next generation. I found that there were some completely different views on leadership, diversity and how immigrants should be integrated.”

He joined an initial group of volunteers in their twenties, from many countries and professional backgrounds, who helped develop Europe101, a series of free online workshops and talks supported by a networking platform. To date, with her fourth cohort just starting, she has registered more than 1,000 participants. They discuss their views and challenges; leadership debate concepts related to purpose, involvement and trust; and engage with each other, reflecting on how they will change and act in the future.

“We’re using a leadership program to connect a generation and give those young people permission to be leaders,” says Julia Middleton, who developed the project, which is overseen by her charity Common Purpose. “Their perception is that leadership is something static and institutionalized to maintain the status quo. We’re challenging that, to make them much more fluid in their thinking. They understand that the role of the leader is not only supportive [the employees] but the performance of duty.”

Europe101 reflects a wider demand from individuals and employers for flexible new approaches to training and building links across national borders – and at a time when aspects of UK government policy have moved in the opposite direction, from Brexit to cuts in international exchanges and volunteer programs. .

One example is the decision in 2020 by the UK to withdraw from Erasmus, the EU-backed system focused on supporting students to typically spend a year at a university in another country. It was replaced by the more modest Turing program of short-term placements for Britons, with no reciprocity agreement for nationals of other countries to come to the UK.

There are all kinds of reasons to improve leadership and young people think our generation has messed things up. They want to be part of the decision making

“The best thing the UK could do would be reunification,” says Juan Rayón González, president of the Erasmus Student Network. He cites benefits such as better communication, team building, cross-cultural understanding and civic engagement. “Erasmus alumni vote more in the European elections. It turns them into more active citizens.”

Other British-backed programs have also been squeezed. For example, the International Citizen Service program, run by the Foreign Volunteer Service to provide 12-week placements, was discontinued in 2020. “It nurtured active citizenship, built your confidence, gave you a better chance of employment and improve your well-being.” says Philip Goodwin, chief executive. “We talk about global Britain and opportunities around the world, but there is no money behind them. This is a great loss.”

Programs like these can have the greatest benefits, but require expensive periods abroad. This limited the variety of people who could participate, while also raising environmental concerns about the carbon footprint of the travel involved. The coronavirus pandemic spurred alternative, online approaches: forcing business schools and other institutions to adapt.

The growth of programs such as Europe101 suggests that the approach will evolve. For employers such as Danny Bisland, a manager at the Scottish Football Association who has appointed a number of participants, the benefits are clear.

“We’re seeing a huge shift away from teams to large community-led organizations,” he says. “Clubs in Scotland pivoted incredibly quickly during Covid from football to supporting food banks, the elderly, community care. That’s the only way it will continue. The role of the young person is so critical: they can talk to their peers. We are really interested in promoting the integration of young people in decision-making.”

Nicolas Kloos, a German mechanic who attended Europe101’s weekly workshops, says the sessions helped him better understand the importance of taking into account the perceptions of others. He thinks that networking, in particular, can provide the greatest long-term benefit. “The most important thing is not what you know, but the people you know and the connections you make,” he says. 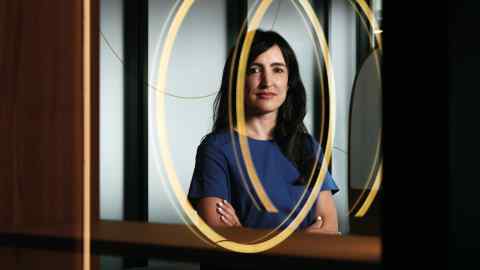 Marshall Marcus, secretary general of the European Youth Orchestra, which is also sending participants, says: “There are all sorts of reasons to improve leadership and young people think our generation has messed things up. They want to be part of the decision-making.”

He believes that with so many pressing issues right now, such as the climate crisis, the program highlights how complex a leadership role can be. And the more culturally diverse the participants, the more valuable the learning experience, he says.

Marcus also adds that the flexible idea of ​​”fluid leadership” behind the program is essential across Europe – and essential in his music profession.

“We need to move away from an old hierarchical style of leadership. When musicians play together, it’s incredible how they’re able to take the lead at the right moment, hold it and carry it through.”

The next test for Europe101 and other such “light touch” online programs will be the long-term impact, including whether participants maintain and nurture the connections they make.

Perhaps, relationships are easier to build when people are together in person, sharing an experience over a longer period – Erasmus participants, for example, would often live and work together.

But since his involvement last year, Ogbo says he has stayed in touch with a number of those he met. He has left PwC to create his own education start-up and become an “ambassador” to recruit other young people in Europe101. He sees an urgency in his generation to get involved in tackling society’s biggest problems.

“We came away with a general feeling that leadership should be flatter and very hierarchical structures were a thing of the past,” he says.